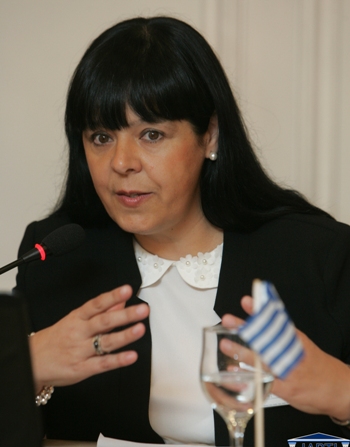 Interview of the month – Aurora Humarán
(Translator – President of IAPTI)

Tell us a bit about yourself. When and how did your relationship with translation start? What is your main specialisation today?

I love words and everything that has to do with them. I learned to read by myself at 5 before starting school. I was ill, and had to stay in bed for a couple of months, and that must have helped, but the truth is that nobody knows how I did it. When I started elementary school, my first grade teacher invited us to “write” every day describing the weather. At the beginning just drawings and a couple of words. Later she was happy if we could string a sentence together. But I wrote a whole page every day, from the time classes began, and even ventured into metaphors: the moon, for me at age six was “the pale walker of space.” I’ve always been an avid reader, and even remember moments in my life associated with my literary friends. What was I doing when I “met” Wilde, Brecht, Emily, Borges, Asimov, Hawthorne, Capote, Papini, Ray, Woolf, Chekov, or Neruda (and a long etcetera of friends)? I started learning English at 8, and fell in love with that language immediately and irreversibly.

Why a translator? I am also a big Beatles fan, and as a teenager I enjoyed translating their songs into Spanish. I was once translating “Girl,” and felt that the “going to” in the opening sentence was not exactly the “going to future.” That was the day I knew I wanted to be a translator.

Today I am a full-time freelancer, and my main area of expertise is linked to business (finance, legal, accounting, media, and advertising).

A bit about myself? Apart from being a proud translator, I am also a certified proofreader/editor graduated from Fundación Litterae/Fundeu, and in 2011 was appointed Corresponding Member of the North American Academy of Spanish Language, where I currently collaborate in a lexicographic research project”, I started studying Portuguese some years ago, and last year I took some intensive classes in the Greek language to be able to enjoy your country while organizing the IAPTI conference and once I got to Athens. I fell in love with it, and I have plans to start learning Greek in a more formal way next year. I studied Latin at high school, and had always felt tempted by Greek.

Apart from the passion for words, languages, and books, I have another passion that is on standby for now: sports. I used to devote time to enjoying tennis, paddle, indoor-cycle, volley-ball, etc., and I am a certified scuba diver (one star).

I am 54 and have a 29-year-old daughter, who is also a translator, musician and Law student.

I am a graduate from the University of Buenos Aires Law School, but I am not a lawyer. I am a certified legal translator. Apart from the obvious courses dealing with language, legal translators in my country have to study most of the courses lawyers do (Constitutional Law, Commercial Law, Administrative Law, etc.). A legal translator not only knows how to translate words like ‘mortgage’ or ‘pledge’, but we also need to know important differences between them.

I also have undergraduate studies in Marketing as well as in Advertising which have certainly helped me a lot along my path as a translator. I believe absolutely that having a degree in another field is extremely positive and enriching for our careers as translators and interpreters. My 32 years in the profession confirm that we are weird beings, ambitious knowledge-seekers. Most of my colleagues have formal studies or experience in anything and everything. That ambition is one of the hallmarks of our craft. And that is why translators and interpreters are such nice and interesting people to be with.

You are a founding member and the president of IAPTI. How did the idea start and how has the Association evolved so far? What would a translator gain from joining IAPTI?

Briefly,  I thought that, in a globalized world, it was of key importance to have a global association led by colleagues who were comfortable “swimming” in international waters, and who understood that, for example, whatever happens in the UK can affect other countries as well. IAPTI was born to embrace translators and interpreters from any country and in any field, and to help make information flow seamlessly in the globalized world we live in.

As we all know, any possible benefits derived from globalization and technological advances have so far been gleaned, to a very large degree, by intermediaries, to the detriment of professionals. IAPTI’s aim is to help professionals recover the dropped ball with regard to this truly major issue.

IAPTI’s benefits are approximately the same as those of any other T&I association, but IAPTI is a very vocal association. We’re outspoken and sort of “in your face” because we think the times we are living in demand a frontal attitude. IAPTI also has certain policies (for instance, no agencies are accepted as members of IAPTI or as sponsors of our events) that reinforce our stance on defending the rights and interests of translators and interpreters. Apart from this, we organize annual international events, like the one held in London in 2013 and the one held in Athens this year (2014) that are open to all of our members in sixty-nine countries around the world, and occasionally also schedule local events in the different countries and regions where we have representatives. (By the way, we are about to announce IAPTI 2015, which will be held on September 5-6 in a city to be announced soon, and with a great keynote speaker to kick off a great event). We are consistently seeking ways to help members, at both an individual and association-wide level, to face evolving challenges, whether by taking public stances and seeking public action, or by providing advice when it’s asked for in our fora.

What is the situation like for a translator working in your country, Argentina? What are the problems professional translators have to face on a daily basis?

Argentine translators are well known all over the world for our academic background as most of us are graduates of renowned universities. Unfortunately, most of the time the interest we arouse is less because of our expertise than because Argentina is considered to be a “cheap” country to live in. Let me hasten to say that, while that might have been true some years ago—after a 2001 devaluation that reduced the peso to a third of its value during the preceding decade when the exchange rate was one to one—and while this might explain why, back then, international agencies disembarked here in search of Argentine professionals at Argentine rates, it’s certainly not the case today. The fact is that many of us have been fighting that trend from the beginning, seeking equal worldwide rates for equal talent, since ours is a job that most of us could do from any part of the world. It makes no sense that we should charge lower rates than, say, translators in the UK, the US or Germany for the same quality work. For my part, I fail to understand why the idea persists that Argentina should be a cheaper market, but then again, even if it were, I feel we should be encouraging Argentine translators to work on the international market at international rates. In other words, we should use globalization to our benefit.

In what ways has the translator’s profession changed over the years?

As I said before, ours could have been a glorious situation had we been able to profit from living in a globalized world from the very beginning. As a translator, I would love to see my Greek colleagues “profit” from it by working for agencies in countries that offer high rates (UK agencies, for example), and not the opposite: UK agencies knocking on Greek doors because, “Well, you know… your country is in a huge crisis, so you need to take what you can get.” Does a shoe manufacturer seek cheap labor in “cheap” countries? Well, yes. And I truly hope those workers could do something to change that situation. The “invisible” hand not only looks for cheaper labor, but also for cheaper intellect.

The same is true of technology: Agencies have taken control, and are the ones who have become richer and richer (not to mention other ways in which they bring harm to our profession, for example when they share strategic information with our clients). I believe, however, that we’re in time to recover the dropped ball. Associations and individual translators can and must seek to do this by refusing to play the wholesale global agencies’ game. I personally have a strong belief in “the power of one.”